This is an update to the post I wrote in 2018 and has some minor changes (which are highlighted in red) and some changes in the process which are indicated by of the text with reasons given in green.

and then (again in 2018) – You know how I love posting about Workflow?

… so you may well think – is there anything else I can write about Workflow and Lightroom, but I’m afraid there is, and a second training course on using Lightroom for Cardiff U3A members has prompted me to document exactly what I do … currently 🙂

This post will focus on what you can do with Lightroom using the Library module and how you get images into its catalog.

[After a lot of reflection, I decided that I wanted to concentrate on taking photographs and processing them as quickly as I could using a tool that I’d been using for a number of years and which I knew how to use. I decided I didn’t want any pain from choosing a different piece of software that might not last the test of time; I decided that I didn’t want the pain of learning any new piece of software; or the delay in waiting for that software to catch-up with Lightroom – which would continue to be the market leader; and most telling of all in my reasoning was the fact that I suddenly remembered that basic editing would still be possible in the Library Module if I decided to stop my subscription. I could also still link to external editors from the Library Module for more advanced editing. My most important resource which I really didn’t want to have to replicate – the Catalog – was protected. I could continue to use Lightroom Classic for as long as I wanted to, and for as long as I could afford it!]

Step 2 – Remember the Library module is a Catalog not a Repository of Images. This is actually one of the hardest things people seem to grasp. They are used to programs grabbing photos and putting them into a database from which it’s then difficult to extract them. They are also used to programs offering to scan their discs for images and then either creating a copy somewhere else, or just recording where they are. Neither of these approaches improve the organisation of your photo library in any way and at worst leads to duplicates of images across disk(s) and difficulty (and needing to resort to operating system functions) to sort out which was the original image.

… what I’m going to do is describe what I do. It’s not the right way, there are an infinite number of right ways, it’s just the one I’ve developed over 10 years to be the best one for me.

As I indicated in Step 1, I will always be doing a Copy of the image onto my hard disk – I described how I now use an external SSD device to store my images (and catalogs) in a an earlier post, and this is what the top-level structure looks like …

… you can see all my images are in one top-level folder on the External Disk – Photos 2019 – I have decided – to speed up processing – to use a dedicated Rugged SSD (from Lacie with Thunderbolt and USB-C connections) and then move the images within Lightroom to a Master Disk at the end of the year when I make a copy of that disk also for archiving purposes. There are two more catalog folders above: for my standalone desktop version of Lightroom (Lr6) which I stopped using at the end of 2017; and the new Classic (LrClassic) version which was a copy of Lr6 when I decided to upgrade to Classic at the beginning of the year, with everything else in it since then – these are not relevant to this discussion. [Adobe changed its naming and numbering during 2018, and Lr7 became Lr8, or LrClassic.]

This is an important topic in its own right – where do you store your Catalog? It’s so well covered in this article that I’m not going to try and replicate it and this in turn leads to a decision you need to make on changing the default location of where your Presets are stored which is described in this article. In my case I’ve decided to store my Catalog on the same external disk as I store the Current Year Images, my Presets   and some Applications so that I can have the same desktop as I move between computers. Magic and Amazingly Powerful! … these folders stretch way-back to 1967 and are populated as I scan images in from transparencies and negatives as well. [The stars against a few folders indicates that I have to retro-fit my key-wording and Collections methodology to some of the images in these folders – I can remove these as and when I complete the task WITHIN Lightroom, not the operating system!]. Look in a year and you’ll see this … … this is the only part of my Workflow that I have changed. I now rename the files to make them a bit more meaningful and recognisable. A decision I came to whilst preparing the first Course!!

… and make sure that they’re going to be copied to the correct location, and that I’m not importing duplicates. I check that the Second Copy location is checked and the location on a Google Drive is correct, I won’t be adding them to a Collection (as I’ll do that later) and I won’t be building Smart Previews as I won’t be using Lightroom Mobile, and I want the import to be as quick as possible so I’ve chosen Minimal for the Previews that will appear in the Library module … 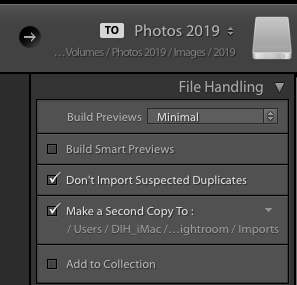 I may change my mind on these latter options. I have started adding some images to Collections at the time of Import, and as I may begin to use Lightroom (mobile) more in the future, I may decide to build Smart Previews.

I’ve decided to rename based on Location or Event, but the destination will be determined by the file structure I defined for the Photos external disk (and described above).

However you will notice that you do have the chance to apply some changes to your images at the time of import and this is where the first of the Presets come into play. I apply a Lens Correction for my camera and I’m applying some Metadata – I’ll come to show you set these up in a later post. 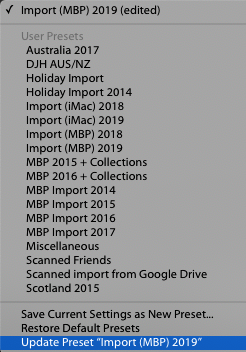 … I would normally select (this year) – Import (iMac) 2018 – and this would be determined by how I’d set the parameters above. The only major change each year being the change in the Copyright Date in the Metadata. So you can do changes to the settings and either Save them as a New Preset or Update the current setting – that’s how easy it is to set this Preset up.

Step 7 – Closing down Lightroom and taking a rest! You’ve earned it if you’ve got this far. After you’ve done your Import your card/device will have been ejected from either the Card Reader, or from the USB port. It is safe to remove it from your computer. [I decided subsequent to writing the original post that I would do a Backup of the Imported images, which I would save in a Google Drive Folder, and I would also save a Backup of the Catalog to another Google Drive Folder when I exited Lightroom. These I delete after I know that both the Images and Catalog have been backed-up to my Time machine Backup – Apple’s Backup System for the Mac range.]