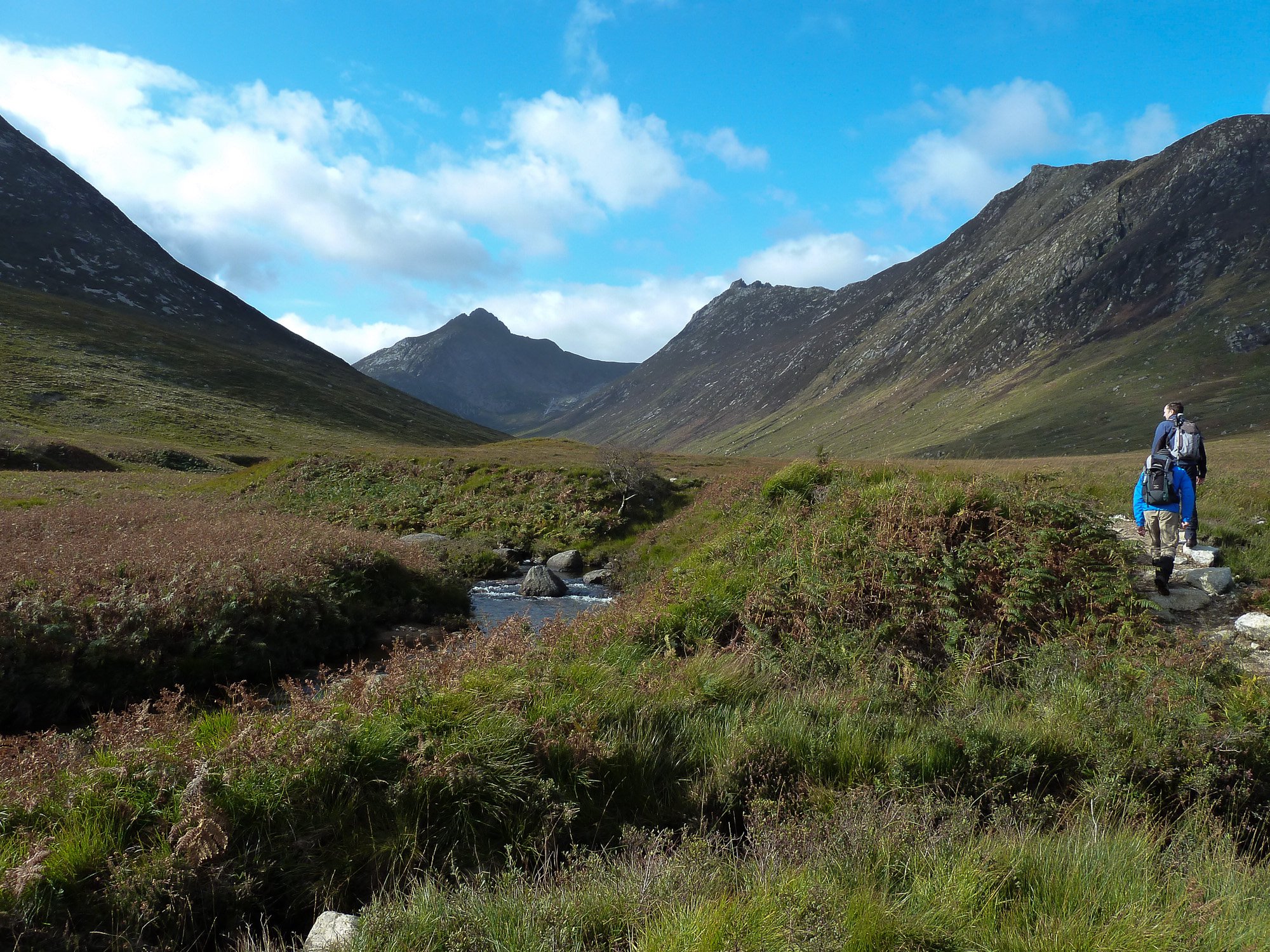 So … three go absent with leave on Arran. Having provided Grandma child-minding services in Leeds, Martin was able to join DeeJay and me on a trip to find yet more distilleries. In fact it was Martin who suggested Arran, and we spent a few weeks working out what we were going to do, using Google+ Events – some lucky folk will be able to see what we did in planning the trip. This post details what actually happened!

The photos on Picasaweb can be seen by clicking on the midge-netted picture of me above; that will take you to the album. Our itinerary is shown below …

[Please note that all maps can be viewed inter-actively on the Everytrail site on a desktop, or laptop computer by clicking on the title above the map; this does not work on a mobile or smartphone device.]

We set off at just after 6:00am as we needed to be sure of getting to Ardrossan (to catch the ferry) by 12:10. This we managed by maximising the motorway/dual-carriageway driving and even with a stop at Abington Services we managed the time well. We took the southern route over to the M6 because there were reports of road closure at Scotch Corner due to the heavy rain that had been troubling the north of England the previous week (see previous post).

So everything was uneventful, the crossing was flat; we found the campsite easily and quickly after a quick stop in Brodick’s Co-Op for supplies and cash; and we set off for our first walk.

A short but eventful walk. Just as we climbed out of Glen Catacol we met a ranger with a German tourist who’d just shot a stag. They were dragging the stag down to a spot where it could be retrieved by a quad-bike. They’d dis-embowelled the animal, so the carrion crows and maybe the local eagles were not going to go hungry, but even though it’s the way of things I passed by as quickly as I could and didn’t engage in conversation. So all my information comes from DeeJay who was ahead of me and who had time to talk to the ranger before he went off back up the hillside to get to his quad-bike which they must have used to get onto the moors that morning. We’d heard the two shots that had brought the stag down – a 14-pointer apparently; and in truth we were lucky not to have had to face the wrath of ranger and hunter because we’d not lodged our walking route with the Ranger Service before we set off. They would have told us to keep off this part of the moor. All we got from the ranger was “that’s a strange way to get back to Lochranza”. It was quite a tiring route, although we didn’t attempt to climb-up our intended route to the top of Meall Mor because the light was failing. Instead we skirted the hill and walking over tussocky and very tiring wet, boggy land then descended down into Gleann Easan Biorach,.

That walk convinced me that I wasn’t fit enough to attempt the walk we’d planned to do to get up Goatfell by way of “The Bastion” and Mullach Buidhe. I didn’t feel so bad about that when DeeJay admitted concerns about his back as well, so an alternative walk for Saturday would need to be planned.

We had passed the Catacol Bay Hotel on our walk and decided to go back there in the evening where we had good beer and ate Venison Burgers, although it would have to be said – I was remarkably not hungry!

The next morning saw Martin go off on a 25km mountain bike circuit which took him out of Glen Chalmadale to Laggan, down the coast to Sanox and then back along the road to Lochranza. DeeJay and I meanwhile walked back up Gleann Easan Biorach to allow me to take a few photographs.

The afternoon saw us in The Arran Distillery for a tour and a tasting. This is an exceptional malt, not at all like the Island malts of Islay nearby. It’s unfiltered and does not have an artificial peaty finish added. It just relies on the pure water, the purest in the UK apparently, to produce a whisky which is full of character and taste. An experience – we were told!

Martin and I decided to walk down to the castle in Lochranza and see the deer. The light was not bad, so we both got a few decent photos. The plus was to be so close to the deer who were not worried by our proximity at all. Evening saw me heat up a curry with all the trimmings (so to speak), and #duettovan managed the task brilliantly! We sampled a bit of the whisky that night too. Each of us having bought a different bottle (or two in my case) so that we could relive the tasting on later occasions!

We’d worked out our Saturday walk; we were going to walk from Sannox – up Glen Sannox, over The Saddle and down Glen Rotha to the Arran Brewery and then catch a bus back to Sannox. The route is shown below …

This was a great walk. Surprisingly, it was only 9 miles long. It felt a lot longer. We’d factored in the possibility that Martin could leave us half-way and go on up to North Goatfell and Goatfell from The Saddle and meet us at the end of our walk, and this is what we did. After a short scramble which I enjoyed but bemoaned the fact that my legs didn’t stretch as far they used to and that something was getting in the way of my close contact to the rock which was never there 30 years ago (guess what :-)), we lunched at The Saddle and Martin set off upwards, and DeeJay and I set off down Glen Rotha. It was a long walk! By the end of it I was feeling quite tired. I got to the bus stop and decided to wait there. DeeJay went on to the brewery to find Martin had already arrived. No comment necessary!!!

Our trip was nearly over. Sunday morning saw us rushing for the earlier ferry because the night had been a shocker. Wind, rain, stags bellowing, etc etc. The rain cleared as we boarded the ferry in Brodick and I decided to drive through Galloway to Dumfries get to the M6 near to Annan. I can’t remember that road at all; the rivers were in spate and it was a pleasure to drive. Coiming off the M6 on to the A66 saw us home quickly and also introduced another new road to me – or at least one I can’t remember driving before.

Home by 5:00pm and Gail had a roast lamb dinner ready for us. What could be a better end to a great trip.