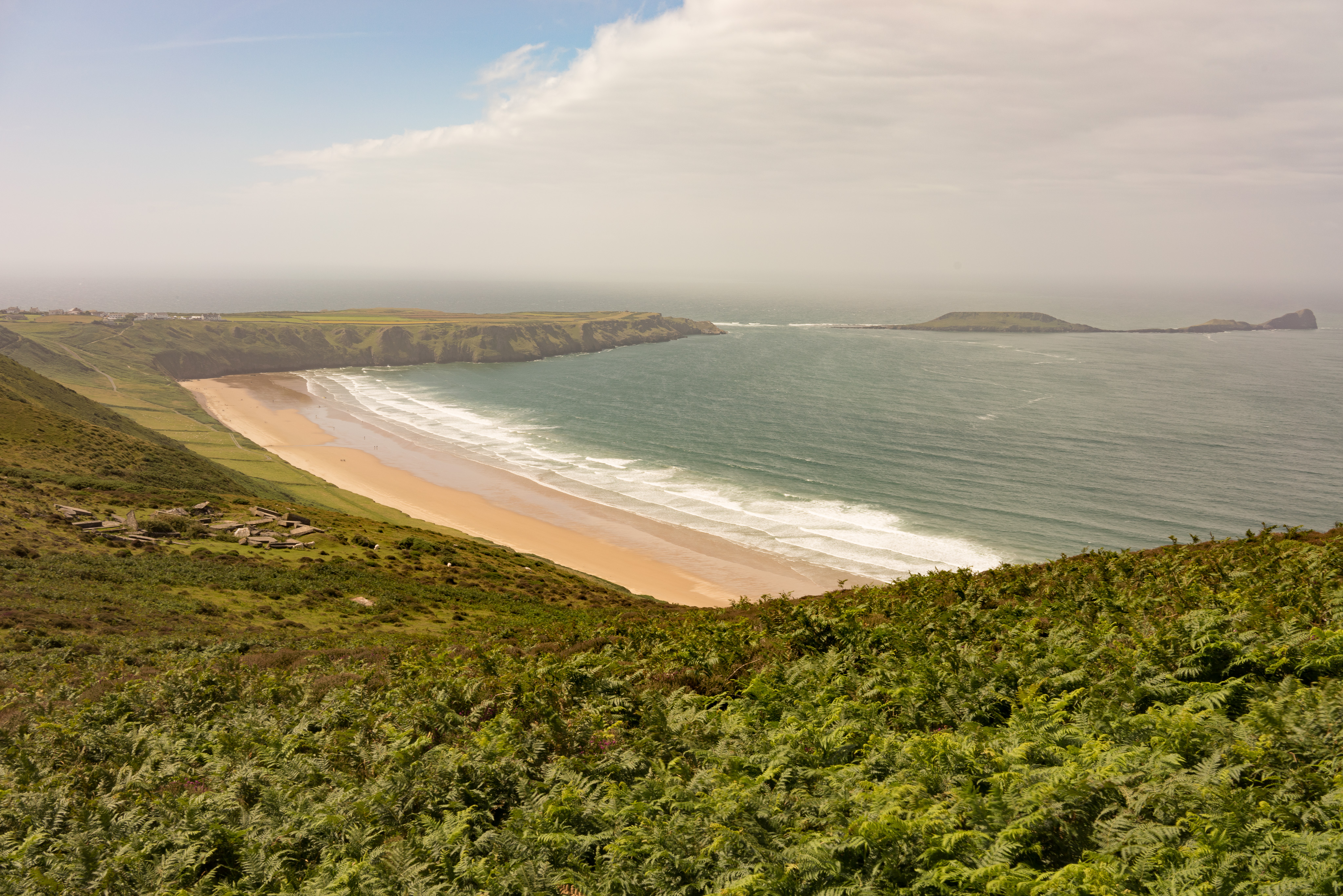 Just one more walk to go after this one and we’ll have got round The Gower. To summarise the stages we’ve done so far …

We returned to do this stretch with two vehicles, leaving just one section to do before we head off into Carmarthenshire and more difficult day travel territory.

After a little bit of confusion – which I won’t detail but Alec can elaborate on if he wishes – we parked #duettovan at the car park in Llanmadoc and drove back to Middleton near Rhossili in Alec’s car. Although strictly not on the WCP, Alec had suggested that the walk would be much better if we walked over Rossili Down and as I’d never been up there, I readily agreed. A great idea and I really wonder why the official path doesn’t go that way, instead it follows the high-water mark across the vast expanse of beach that makes up Rhossili Bay.

This is a walk with some huge wide open views from on top of Rhossili Down. These cannot be appreciated from the blog images below, so you ought to go to Picasaweb (or here on Google Photos) to better see them – starting at Image 34 (Picasaweb) but not here on Google Photos (as there’s no navigation from this image. Duh!).

Below you see Alec striding across Rhossili Down towards the trgig point which, at 193m, must I presume, be the highest point on The Gower. The weather prior to this had been quite grumpy – I’d got soaked walking from #duettovan to Alec’s car at Llanmadoc, but now the sun was out, it was hazy and there was a wind to our side, but it was lovely for walking.

Just too much of a temptation to take pano shots, so there are several – here stitched together in Lightroom 6 using the new pano tool as well as using the new de-haze tool, which I used on many of the other pictures that follow too. Both are very good and easy to use.

Worms Head was not accessible as we started the walk – perhaps the tide will be favourable for the last stretch when we walk from Port Eynon to Rhossili. 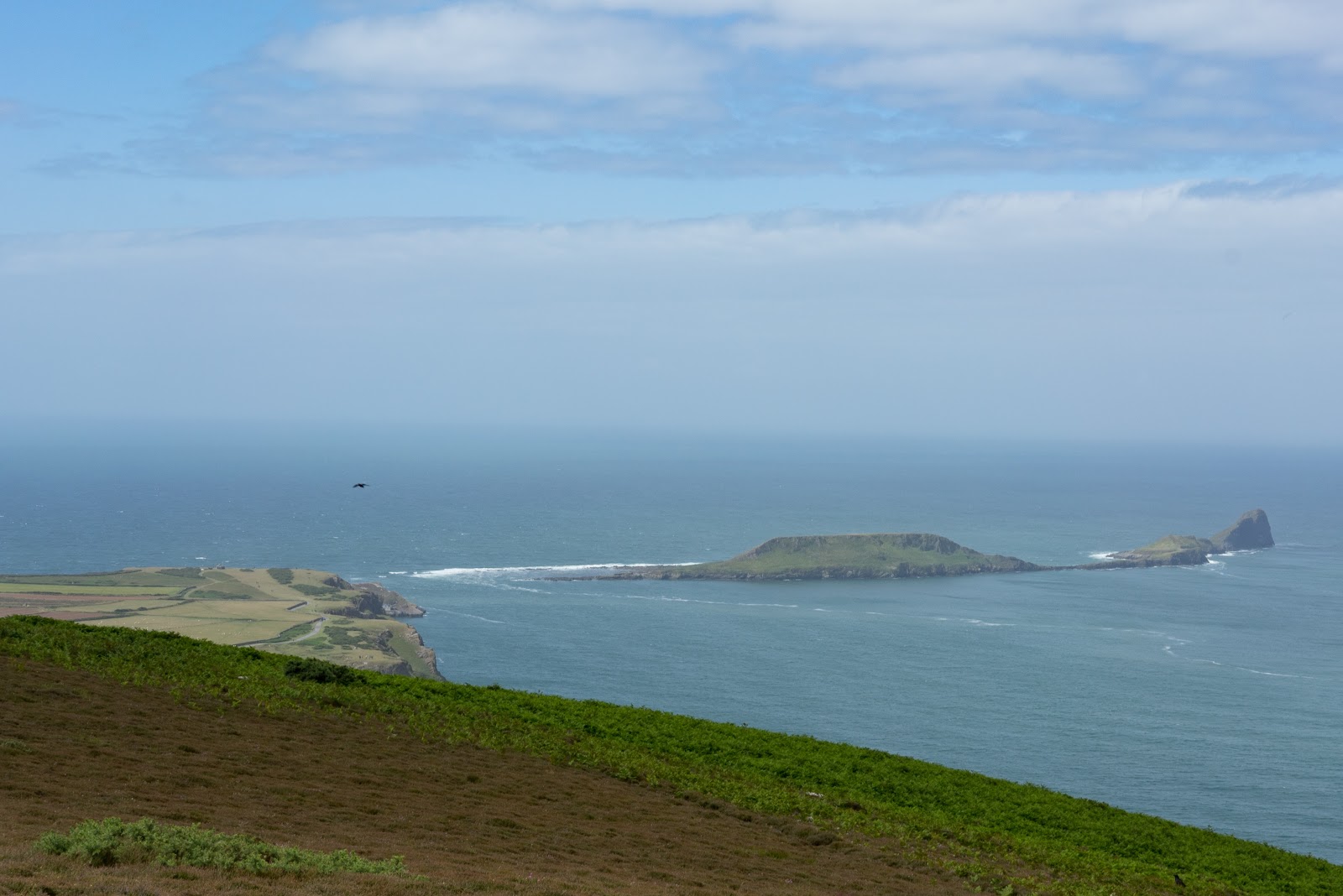 Two more panos of Rhossili Bay – isn’t the viewamazing? The pictures hardly do the view justice. The first one shows the WWII Radar Station, the second takes in the whole Bay.

Then looking north from Rhossili Down before we descended to Hillend you can see where we had to walk – towards Llangenith Burrows and Broughton Bay.

After a brief stop for tea, scone and Welsh cake at the campsite cafe, we started the long walk across the beach towards Burry Holms. Below … an attempt at being clever – a shot from six inches off the sand – what do you think, apart from the seagulls not being in focus!? 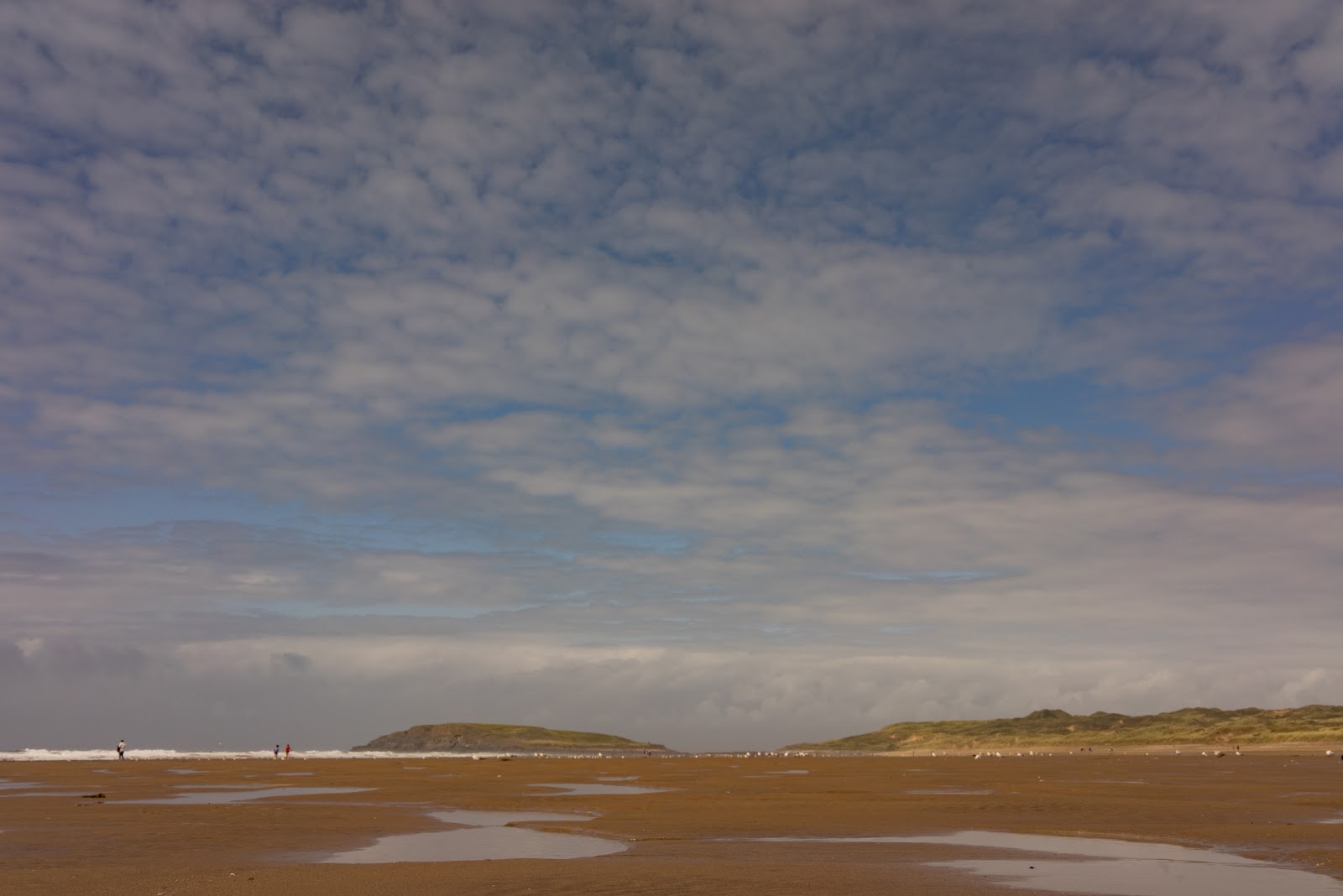 Walking towards Burry Holms, an ancient Hill fort, at the end of Rhossili Bay. We were intrigued at the deep swales of the sand which impounded the receeding tidal sea water. 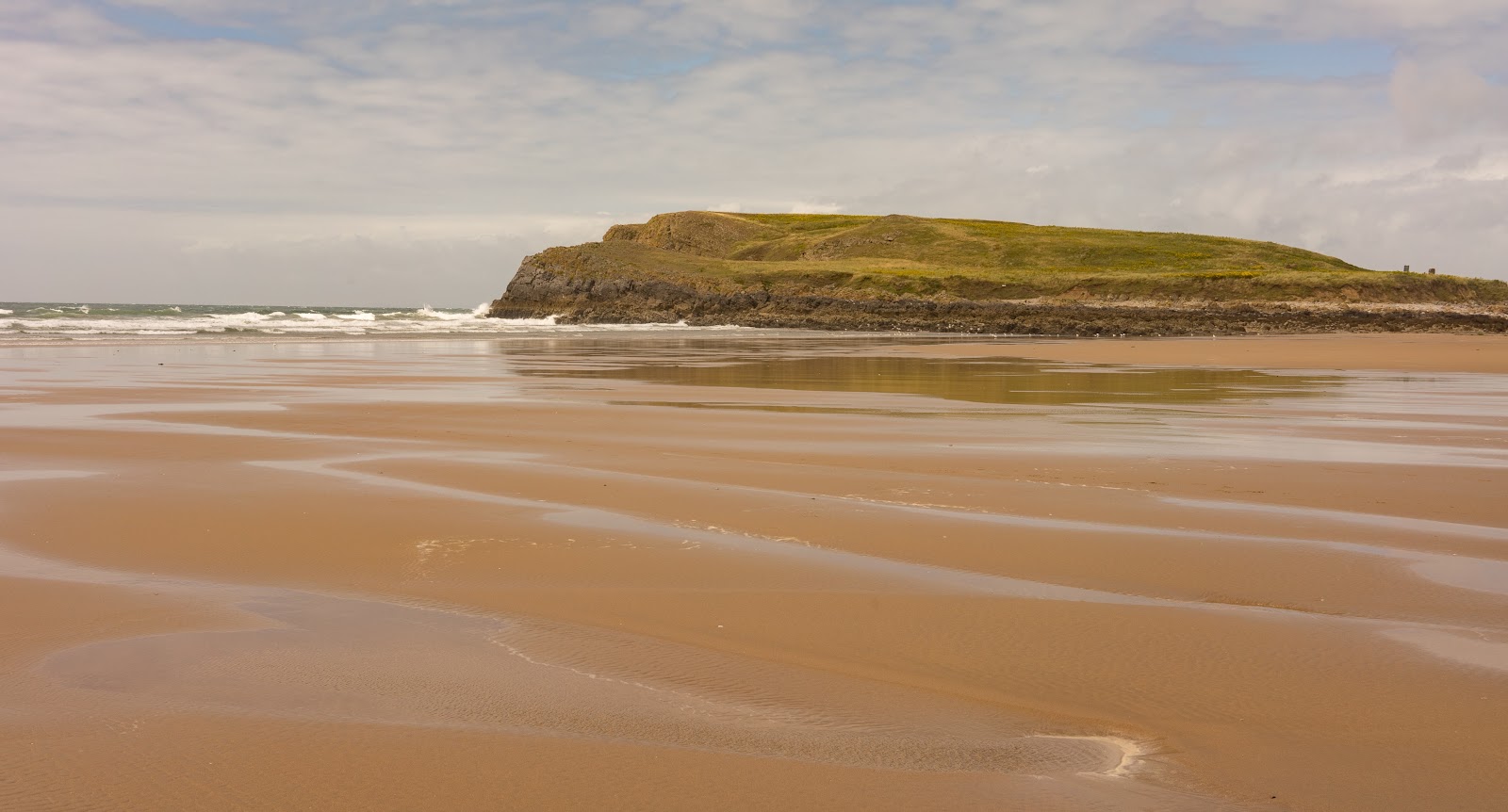 On Burry Holms. We’d walked nearly the whole way round before we came across the ditch that must have been the rampart to the hill fort. Duh! I think this picture shows Alec in the ditch. 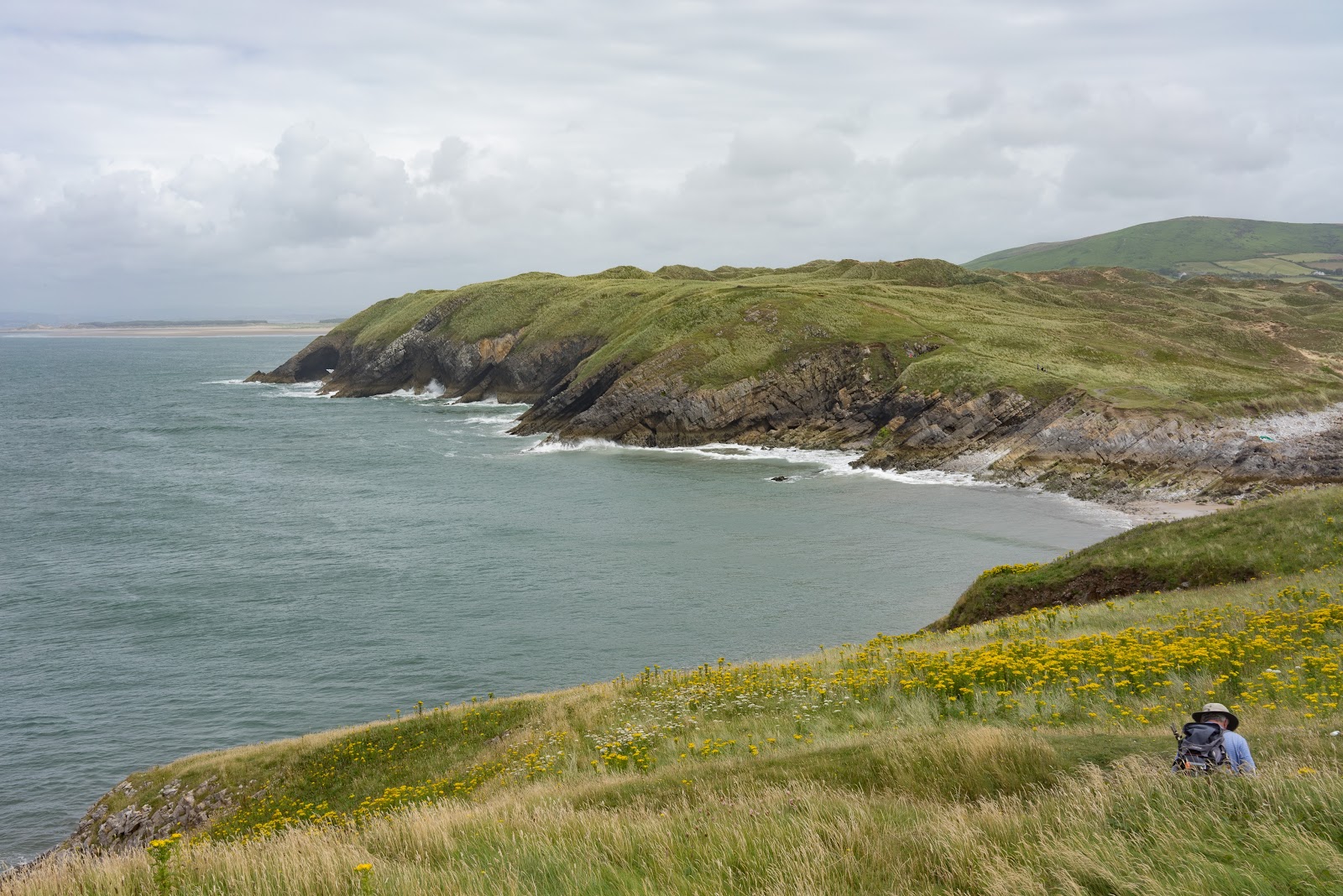 Coming off the island (only accessible when the tide is out) I came across this graveyard of shells. Pretty dramatic! 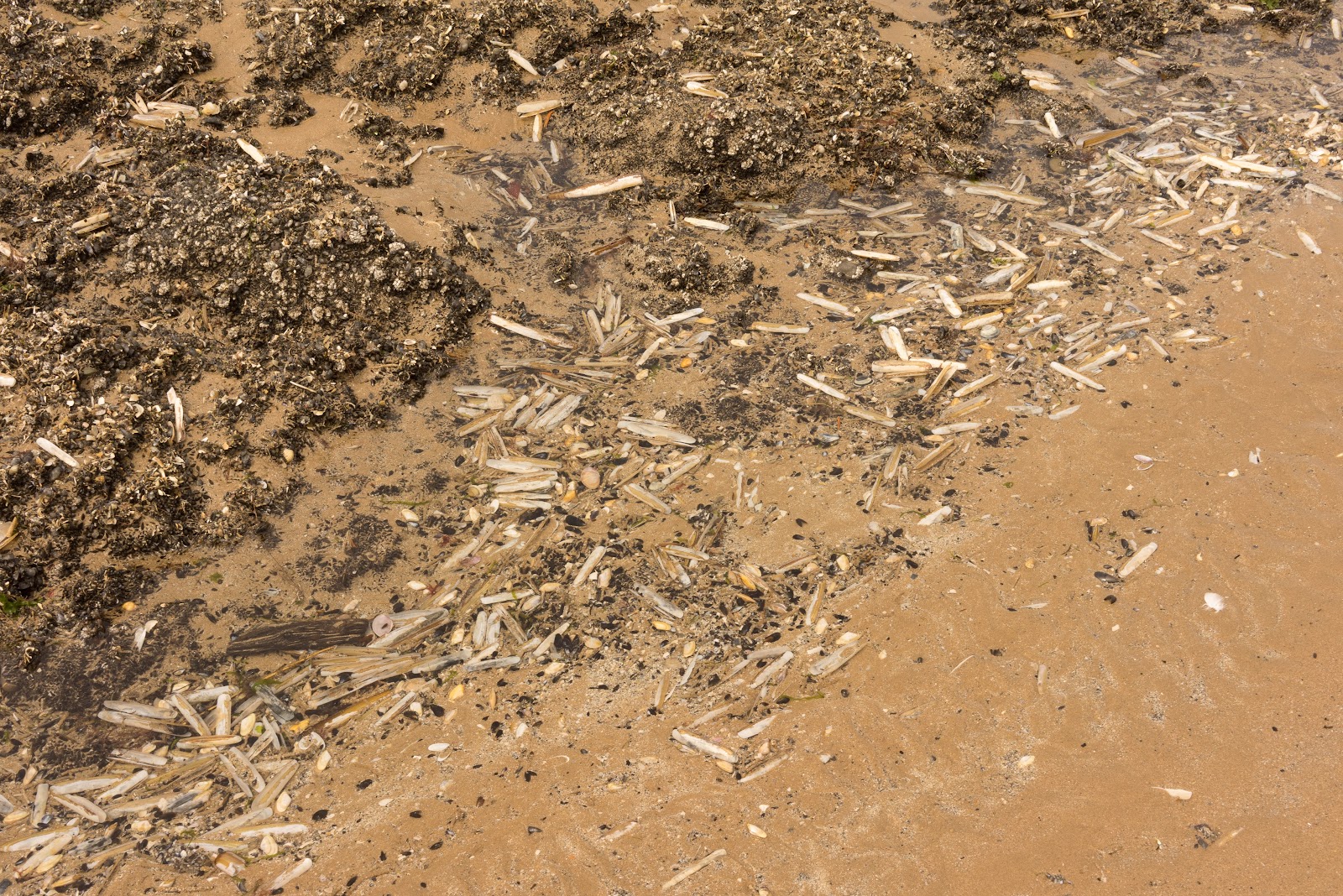 As we left Burry Holms a last look south across Rhossili Bay with Rhossili Downs – a popular hang-gliding location dominating the beach. Lots of surfing on this beach as well (camping at Hillend is £20 per night) – so much space! 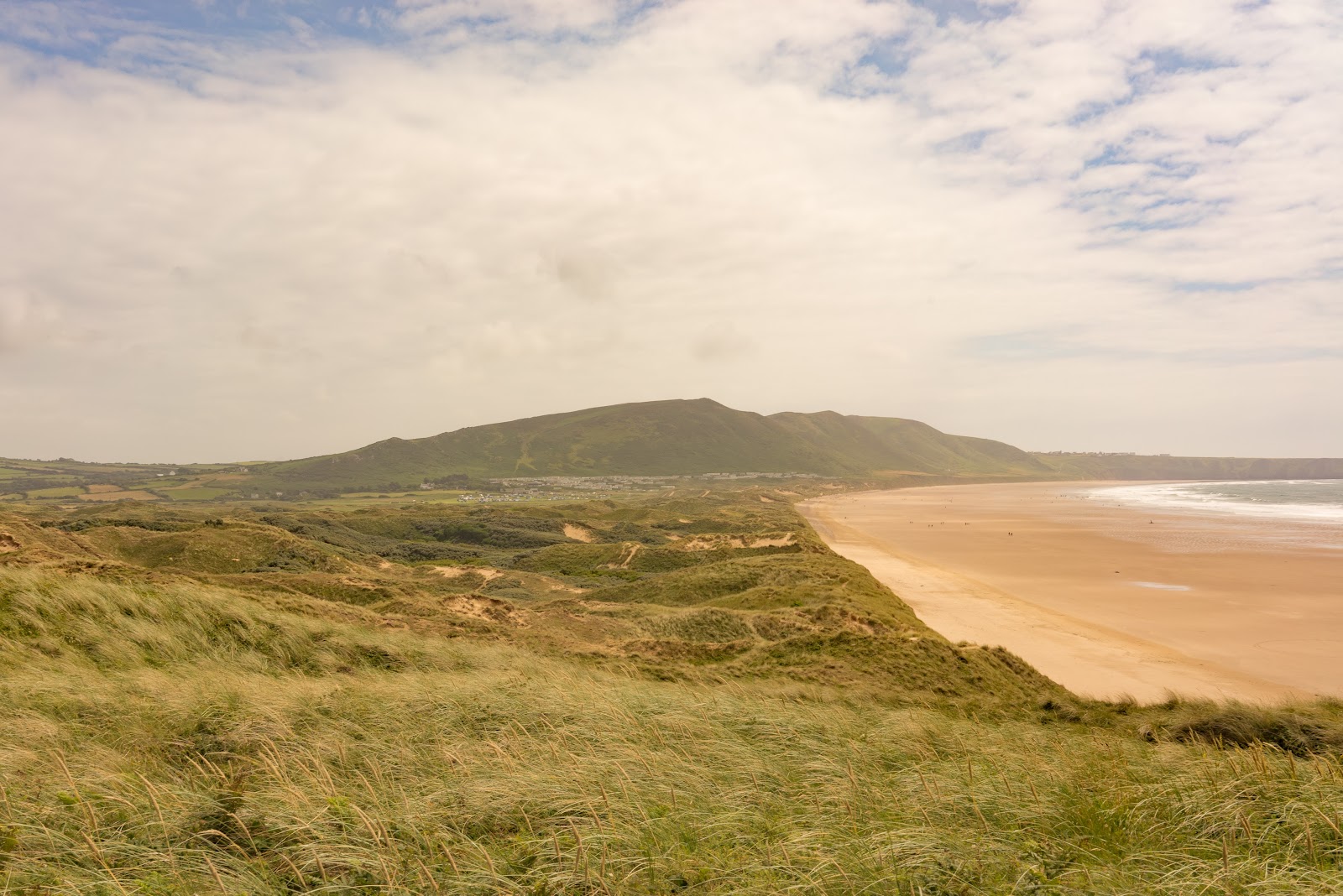 Walking through Broughton Burrows we again enjoyed the wildflowers, here some darker geranium, and some hare bells … 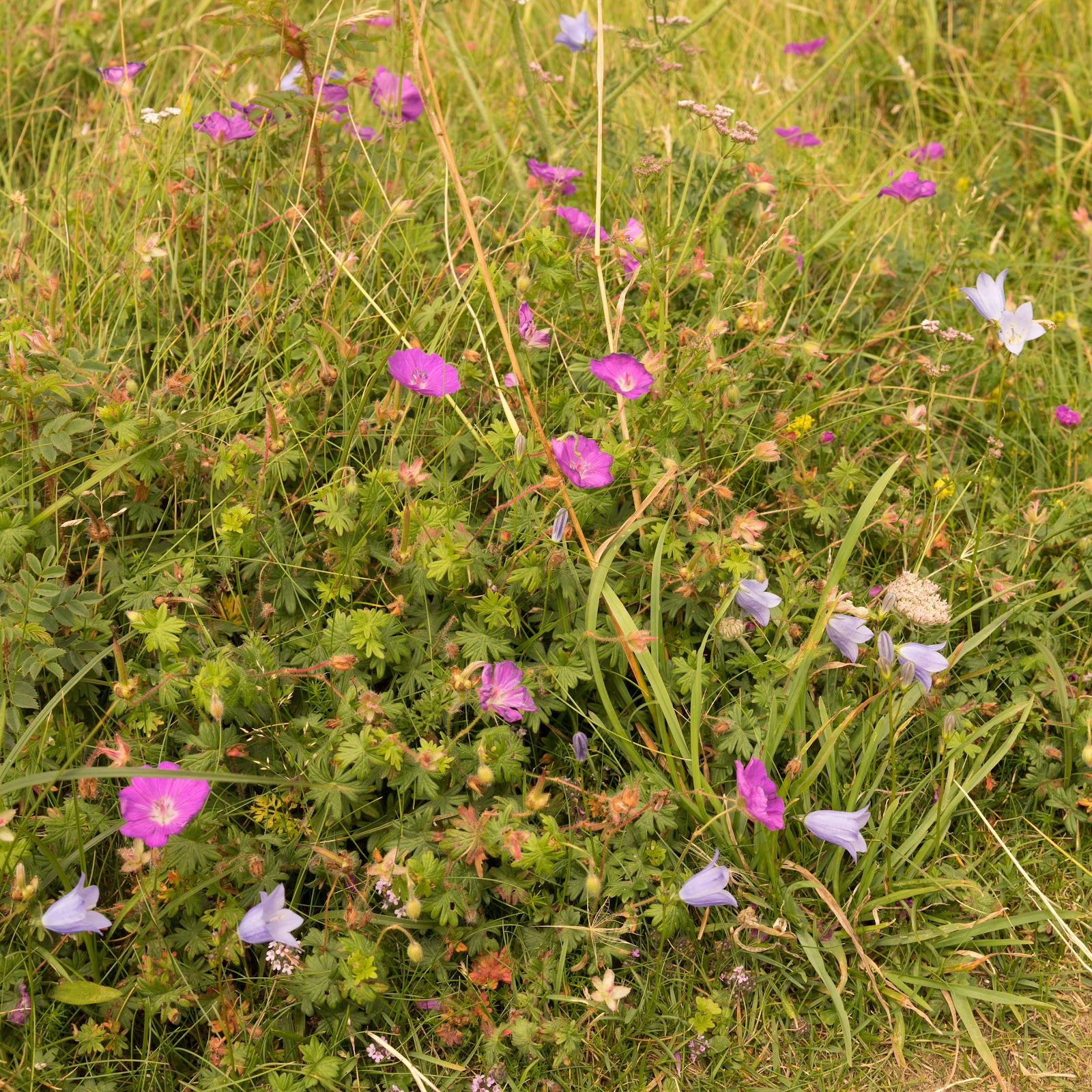 Here a carpet of small blooms …

The bay and cave at Foxhole Point, very secluded and difficult to see how you got down to it. 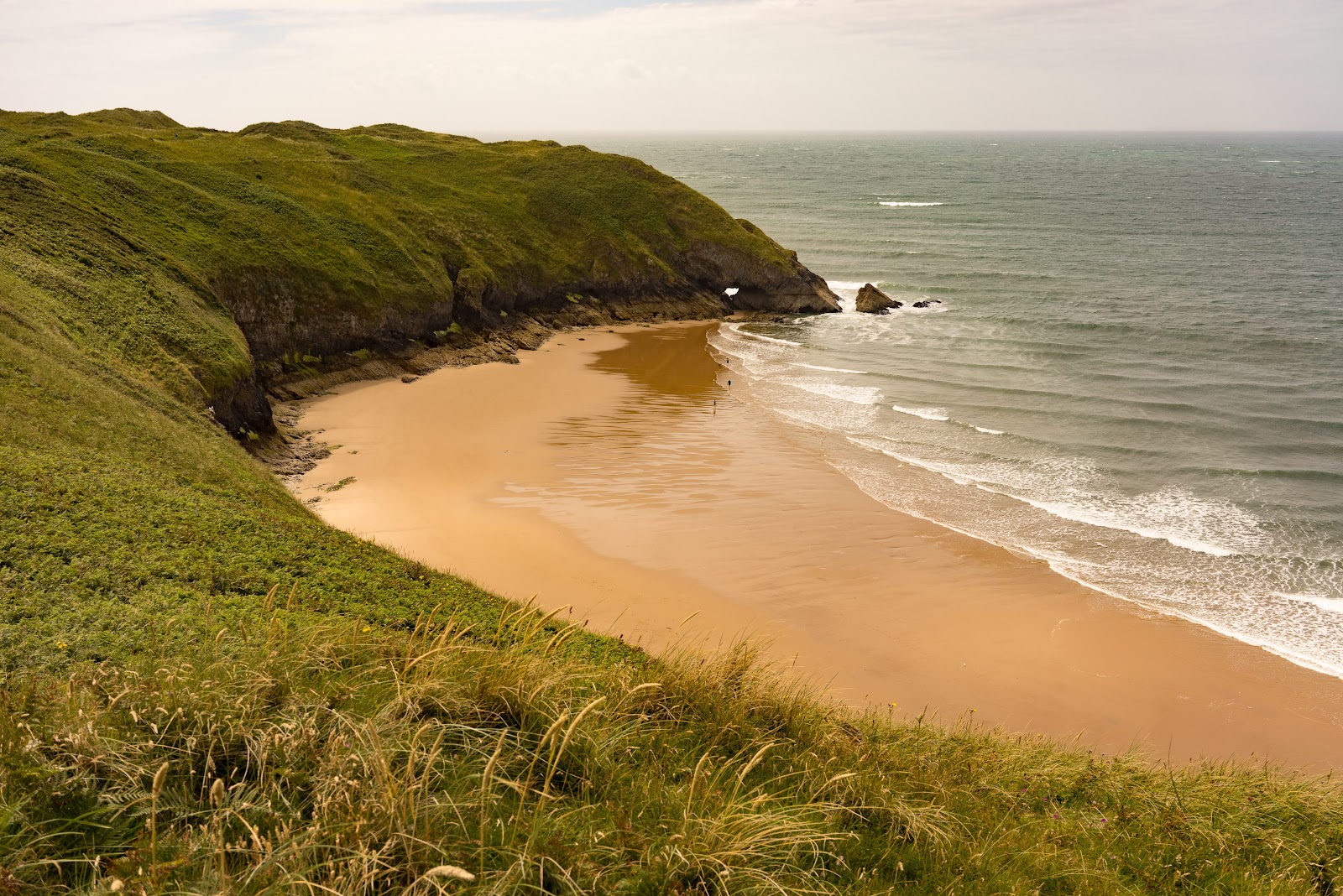 Our first view of Broughton Bay with Hills Tor and Prissen’s Tor marking the end of the bay and the point at which Whiteford Sands begins. It was here that Alec elected to walk across the beach and I opted to stay on the Path and walk through the caravan site, behind the burrows and up over the hill behind Cwm Ivy. 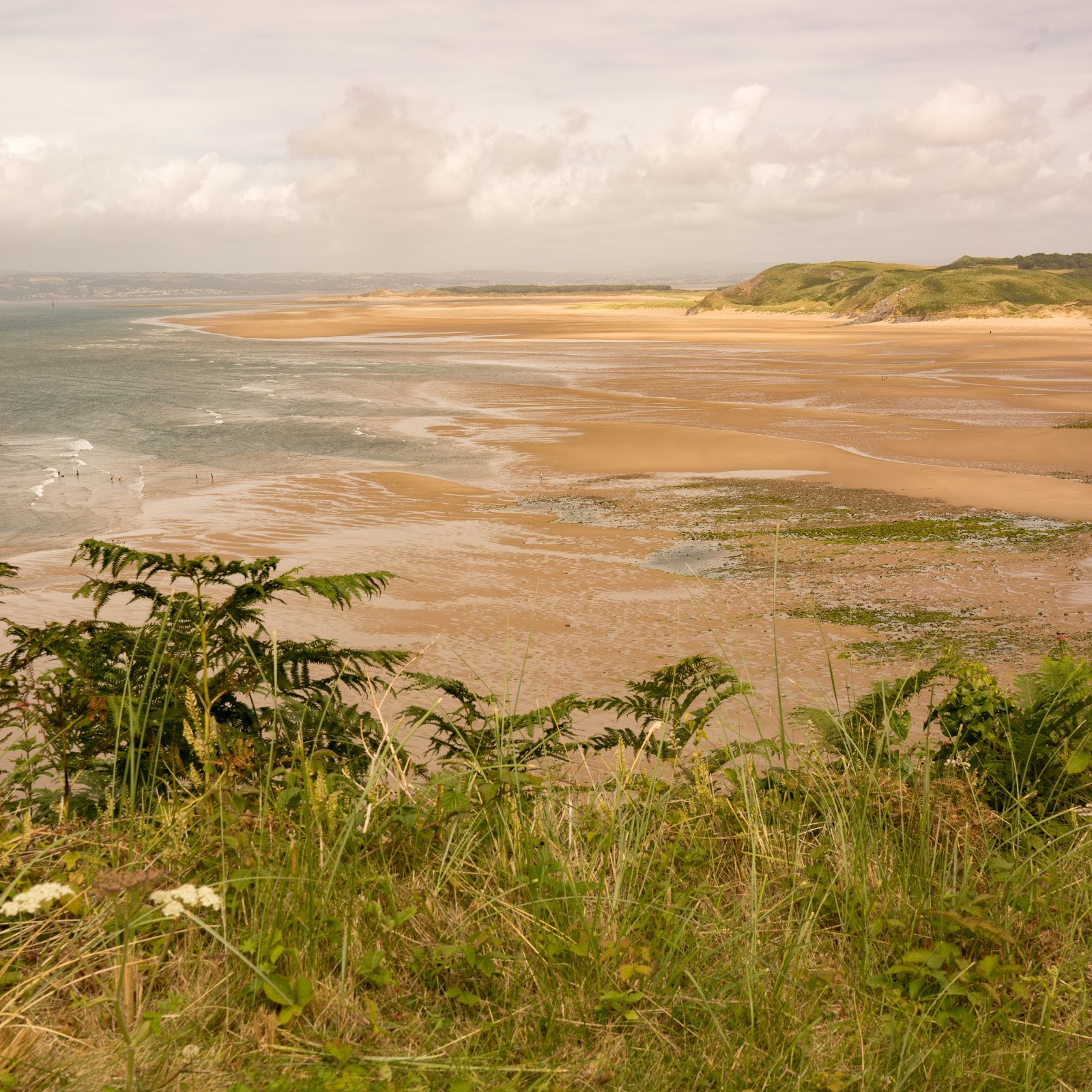 The view of Whiteford Sands and Burrows, looking across to Berges Island where we had walked the previous week. Just beyond this point is where I met up with Alec who had walked round the Tors and through the dunes in the foreground. 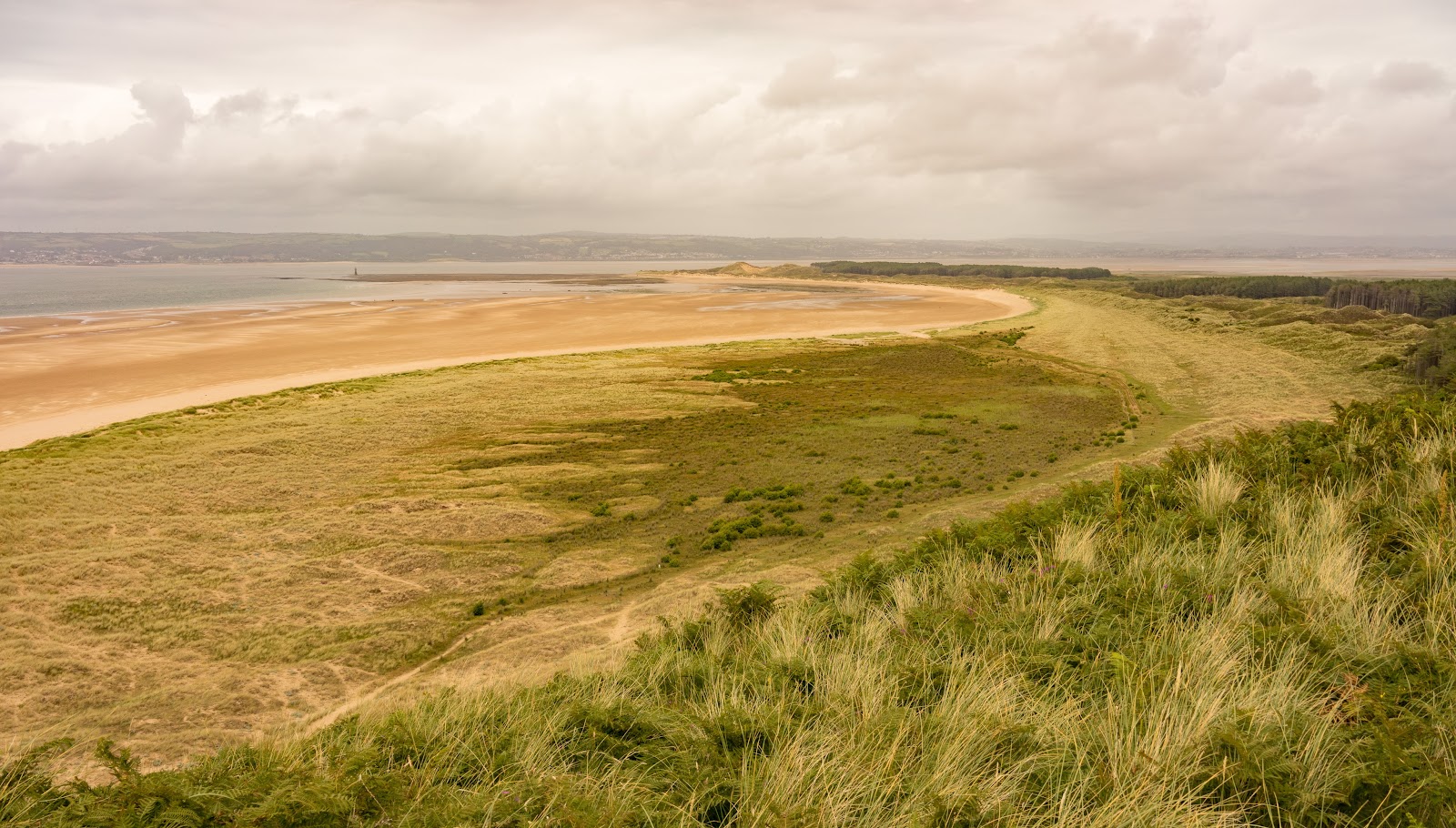 A fantastic walk, much better than I’d ever expected it to be, and at 7.6 miles, an almost perfect length. We did the vehicle transfers in reverse and met up at the King Arthur’s Hotel in Reynoldston to relax and have a little fun. Again, I’ll leave it to Alec to expand on this, if he should so wish. Anyway this is the route I took – Alec deviated from it as we left Hillend but we both arrived at the path up to the car park at Llanmadoc at the same time …