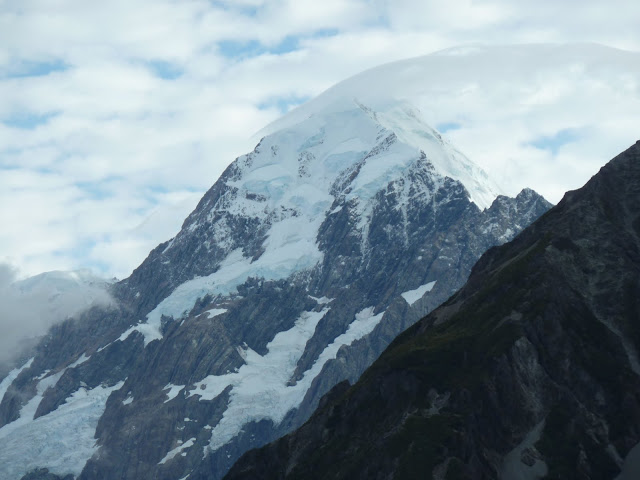 The picture below is of The Hermitage. This luxury resort could be thought to be “out of place” in the wilderness that is Mount Cook. However, all other development is strictly controlled and because of that fact – it sort of works! 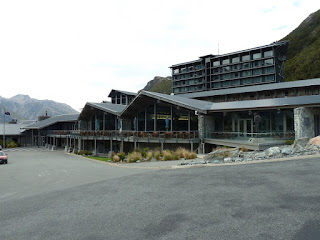 We had breakfast in the hotel having had a pleasant evening in our chalet apartment. We then set off in the car to take in a visit to the Tasman Glacier Lake. This lake sitting behind the glaciers’ terminal moraine was seen at its most moody and gloomy best. We walked up past the Blue Lakes (which weren’t blue as the sun wasn’t shining) and we were not tempted to take a dip. Once at the top of the moraine we could see the full set of lateral and recessional moraines of the Tasman Glacier as well as a couple of “icebergs” – ice that detached itself from the snout of the glacier further up the valley. Some photographs (below) sort of give you the picture. 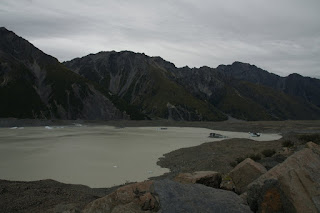 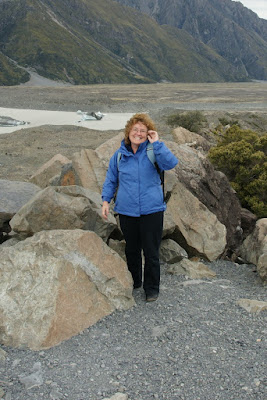 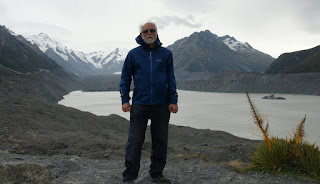 The outwash plain below the Tasman Glacier with its braided streams

As you may have guessed this was just heaven to the physical geographer in me. Although I’d seen the Athabasca Glacier in Canada, I’d not see anything quite as impressive as Mount Cook and the Tasman Glacier – but more was to come later! 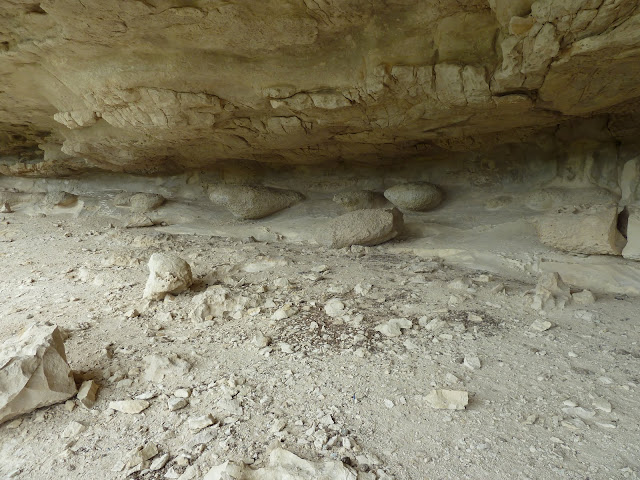 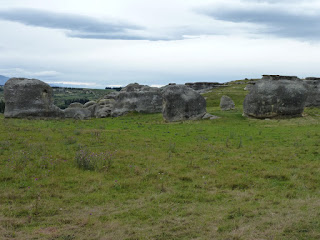 We left Mount Cook and returned down the side of Lake Puakiki heading for Oamaru, but first there was Twizel – the town that refused to die. This town was built solely to service the massive hydro-electric work that was undertaken in the period from 1968 – 1984. It was scheduled to be closed, abandoned then, but the residents thought otherwise and have survived through servicing the tourist trade. We stopped here for a cup of coffee and then pressed on taking in the Maraewhenua Maori rock paintings (below) and the Elephant Rocks – used in the filming of Narnia as Aslan’s Camp (right). 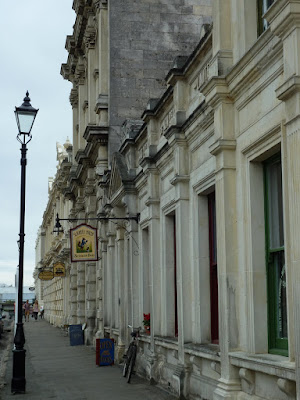 We were now about to enter Oamaru which was one of the strangest experiences (for me) of the trip and yet also one of the most profitable. Let’s just say that parts of the town are in need of some TLC. The old heart of the town has been restored for the tourist trade, but the seafront nearby is in desperate need of renovation.

But in the old town there is a plethora of arts, crafts and book shops. We really enjoyed browsing and I came away with some books and a painting which I bought from an art gallery – I never expected that, but when I saw it, I just had to have it. Didn’t think about how I was going to get it home … I just had to have it.

The picture is of a North Island creek and you can take a peek at it here. 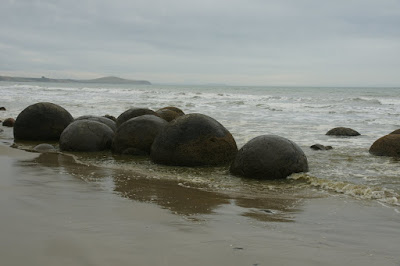 Leaving Oamaru by the coast road and having seen the boulders at Moeraki – more about them here – and thinking we ought to have something to eat, we dropped down into Moeraki to sample the food at Fleur’s Place … but unfortunately it was closed. That meant that we needed to press on with a little more speed to reach Dunedin where we checked into “Motel on York”. Another light meal in the motel room, a short walk into the town centre – looking for cathedral steps (more about that later too) and we turned in, it had been a long day!

The pictures from the day (including the ones above are on Google+ Photos.