We arrived in Christchurch on the 28th January in the early afternoon, having had a relatively uneventful trip on an Air New Zealand flight from Melbourne. The highpoint was the safety video which had the NZ rugby team plus Graham Henry holding our attention in a humorous way whilst getting the serious messages over. It was certainly a novel way of getting attention.

geography of the central area by taking a tram ride.

The damage caused by the earthquakes in September 2010 and at Christmas 2010 was evident with many of the buildings being supported. That evening we went to Sticky Fingers on Oxford Terrace where I had awesome Lamb.

The next day we set off reasonably early having arranged for a return visit at the end of the holiday – having been so pleased with the room. We had a long drive ahead of us as we wanted to take it easy but still get to Aoraki Mount Cook early enough to do a bit of walking and “looking around” before nightfall. The route we took is shown on the trail below. We stopped in the Bakery in Darfield to have a coffee (I had a meat pie too) and then went next door to the supermarket to stock up for the trip ahead. We found some things to be cheaper than at home, some a little more expensive, but overall much cheaper than Australia. The trials and tribulations of exchange rates if you live in the UK (or NZ, I suspect).

The route than took us along the eastern foothills of the Southern Alps with spectacular scenery on our right and with lush, rich pasture on either side of us. We noticed the field boundaries were marked with tall evergreen trees – no doubt to provide wind-breaks. The effect however was rather strange as it appeared that they were giant hedges around the fields.

We stopped at the Rakaia Gorge and were impressed by the huge river cliffs where the river had cut into the glacial deposits and the vast plain of braided streams and then pressed on to xx where we had a picnic lunch and chatted with a couple (originally from yy) who had emigrated to NZ in the 1960’s.

The panoramic view of the Surrey Hills and the rich agricultural land in front of it from the bluff we were viewing them from was truly breathtaking. 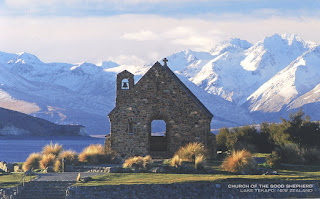 Then it was on to Geraldine, where we had the briefest of stops, before heading on to Fairlie and Lake Tekapo which is famous for the Church of the Good Shepherd (built in 1935) which is a favourite wedding location – a fact we observed for ourselves. The briefest of strolls beside the lake near the church and it was back in the car and off to Lake Pukaki where we stopped at the Information Centre. It was here that we got our first real sight of Mount Cook, at the head of the turquoise blue lake. The rest of the drive was punctuated by quite a few stops as I attempted to get the “perfect picture“. 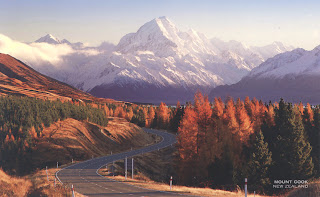 We had booked into a cabin at The Hermitage Aoraki Mount Cook Alpine Village. The room was well organised and functional, unfortunately it didn’t have a view but the location was amazing. Before we ate that evening we walked up to the foot of Mount Cook to the point where the Mueller Glacier (coming in from the left) joins the Hooker Glacier at its snout. The lateral moraine of the Mueller Glacier almost completely blocking the valley of the Hooker River. It was a lovely walk, the sun kept out until it just touched the very peak of Mount Cook as it set in the west. A wonderful end to a lovely day. 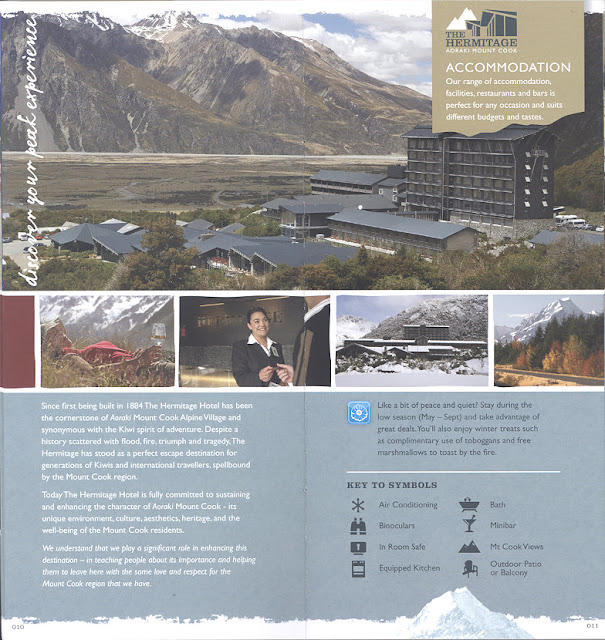 Pictures for this day are to be found on Google+ photos (Picasaweb), they’re marked on the trail above, and you can watch them in the video slideshare below.