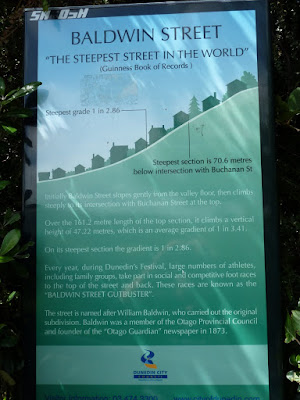 We spent the morning walking around the city of Dunedin – a lovely place. We spent time in the cathedral and the railway station – which was magnificent. The tiling and marble was quite exceptional – amazing that so much was spent on “temples to the railway age” isn’t it. Then we drove across to Baldwin Street – the sign to the left says it all. We walked up the street and took a few photos on the way. Surprisingly, we didn’t find it as tiring as I thought we would, short and sharp climbing is better than long and drawn out. We then headed out for the Otago Peninsula and enjoyed our drive beside the water although the wind when we got to the far end was so strong that the only sensible thing to do was to go into the cafe at Harington Point and give the Royal Albatross colony a miss. The drive back the other side of the peninsula was spectacular – a narrow road and steep drops to rocky cliffs. No time to stop however as we had a bit of a drive to do to make our next destination – Kaka Point and the Yellow-eyed Penguins that we hoped to see.

What a joy! Penguins are always a delight, and the ones at Nugget Point were no exception. We stood in a hide for about 40mins and watched them come ashore, and unlike the Little Penguins that came out in small landing parties, the Yellow-eyed Penguin comes onshore alone, stands to dry out then socialises with others before it walks up the beach. Fantastic!

You can also see the photographs from this day on Google+ Photos, rather than watch them on the slideshow below.